How to Join the Merchant Marine

If you’re looking for a career that offers challenging physical work, substantial pay and an opportunity for adventure, the Merchant Marine might be right for you.

The Merchant Marine, sometimes called the merchant navy, consists of civilian vessels — such as tankers and cargo ships — that import and export goods to other countries. The U.S. transports 75% of its trade goods by sea, and mariners, also known as water transportation workers, serve on these vessels to make sure the products get to their destinations safely and on time. Mariners may be pilots, mates, captains or seamen, but they all play a role in ensuring the smooth travel of commercial vessels.

Why should you join the Merchant Marine, and how can you get started? Read on to learn more about the process.

Why Become a Merchant Mariner?

You should become a mariner for a variety of different reasons.

How to Become a Merchant Mariner

Most prospective mariners must typically undergo certification with the U.S. Coast Guard. The following are some steps you can take if you are interested in becoming a merchant mariner.

Mariners can choose from among different career paths within the Merchant Marine. The three possible options are the engineering, deck and steward’s departments. Prospective mariners should decide on their intended career paths early, since your chosen career path will determine your requirements for the merchant mariner credential (MMC).

Apply for a TWIC

Before applying for a prospective mariner must first apply for a Transportation Worker’s Identification Credential (TWIC). The TWIC indicates that the applicant presents no security threat. To receive a TWIC, an applicant must pass rigorous FBI and Department of Homeland Security background checks, which typically include an immigration status check, a criminal background check and a terrorist watch list check.

Get a Physical and Drug Screening

To become a mariner, an applicant will have to take a physical and undergo drug screening. Passing these tests is critical. Conditions such as heart disease and specific psychiatric disorders may be disqualifying for those who don’t take medications to control them.

Apply for an MMC

For the MMC, applicants will have to show proof of having passed drug tests and medical examinations, including tests of their physical fitness, vision and hearing. They must also provide proof of their citizenship and required experience.

Participate in an Apprenticeship Program

MAP takes a little over two years. It involves 26 weeks of classroom education and 360 days of sea time. The onboard maritime training reinforces and enhances the lessons learned in the classroom, so apprentices have many chances to get hands-on experience and put their new skills into action. The training vessels belong to reputable partner shipping companies, and each apprentice remains with the same company throughout training to become familiar with a consistent set of practices.

Completing the program qualifies apprentices to sit for mate-level licensing exams. Those who finish MAP will hold Able Seaman Limited and STCW able seafarer-deck qualifications as well as STCW OICNW credentials. They will have the skills, experience, and license necessary to become deck officers on commercial vessels.

Below are some FAQs and answers about the Merchant Marine. 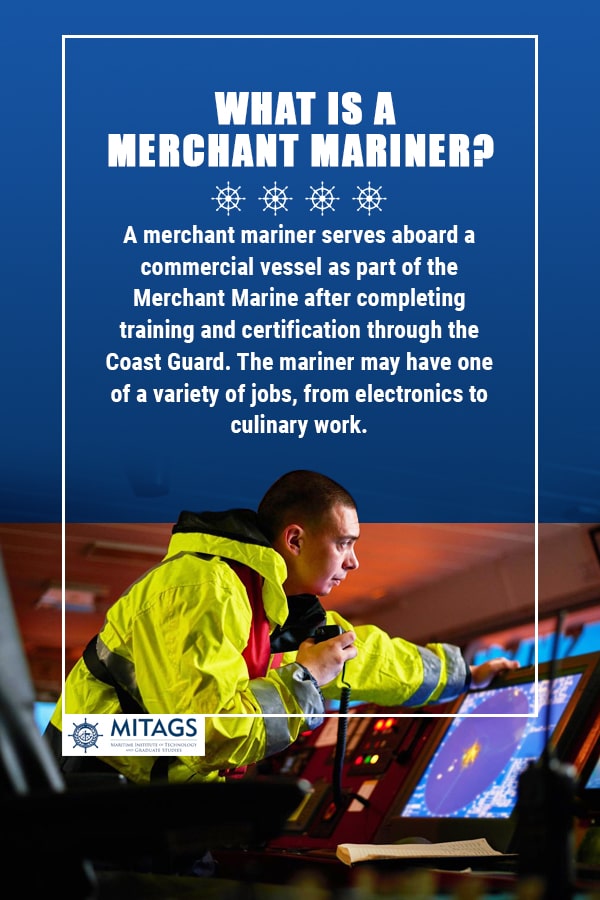 What Is a Merchant Mariner?

A merchant mariner serves aboard a commercial vessel as part of the Merchant Marine after completing training and certification through the Coast Guard. The mariner may have one of a variety of jobs, from electronics to culinary work. Mariners help keep a vessel operating smoothly and ensure that the vessel, cargo and passengers get safely to their destination.

Mariners may work on a variety of ships. Common possibilities oceangoing container ships, bulk carriers, towboats, ferries, dredges, and cruise ships. Mariners’ careers may take them to just about anybody of water, from the oceans to the Great Lakes to many harbors, canals, and rivers.

Some different types of mariners include the following.

How Long Does It Take to Become a Merchant Mariner?

The time required to become a mariner depends on the route an applicant takes. A person who joins as an ordinary seaman may become a mariner after passing the required courses and exams and receiving the necessary credentials, which may be a matter of only a few months. An applicant who goes through an apprenticeship will likely be in training for over two years, though much of that training time is sea time. If an applicant goes to the Merchant Marine Academy, the timeline will be four years or more.

Is There an Age Limit for the Merchant Marine?

There is a merchant marine age limit, with 16 years old being the youngest age a person can be. If a person is old enough to work full-time — typically 16 years old — that person is old enough to apply for an MMC. However, requirements vary from company to company, and some shipping companies may not accept workers who are not yet 18. Some endorsements, such as the lifeboatman endorsement, may also require the mariner to be at least 21. A third mate or similar officer must be at least 19.

There is no upper age limit for who can join the Merchant Marine. Some people who have retired from their first careers have gone on to successful second careers as Merchant Mariners.

How Much Does a Merchant Mariner Make?

After training, in which trainees may receive modest stipends, the Merchant Marine pays very well, especially for entry-level work. As we also indicate in the FAQ section of our apprenticeship page, the median pay for a tugboat deck officer is $400 a day. There is no centralized organization that sets a pay scale, though, so pay in other sectors of the Merchant Marine varies, and it also varies with education and experience. The Bureau of Labor Statistics reports that the median income for a mariner is just over $54,000 per year.

Is the Merchant Marine Part of the Military?

No. Though the Coast Guard manages certification and training, mariners are civilians. The merchant marines are not a part of the military. Some of them work on ships that support the U.S. Navy, but aren’t active members of the military. The Merchant Marine receives support from the U.S. Maritime Administration, an agency of the Department of Transportation. In wartime, the Merchant Marine has sometimes transported military personnel and equipment.

How Much Do Merchant Marines Get Paid?

What Are the Merchant Marine’s Physical Requirements?

Mariners must pass a vision test and a physical fitness test. A prospective mariner must demonstrate strength, agility and flexibility, as determined by the examining medical professional. If the examiner doubts the applicant’s ability to perform essential shipboard functions or meet the demands of an emergency response, or if the applicant’s body mass index is 40 or higher, the examiner may require a demonstration of specific abilities.

Start your career with the Merchant Marine by receiving the hands-on training and sea time you need to sit for your mate’s license and become a deck officer. Our apprenticeship program has received approval from the Coast Guard and the Department of Veterans Affairs and has produced many successful and well-respected mariners over the years.

How to Recruit and Retain Seafarers

As in any industry, the recruitment and retention of excellent employees are critical to the success of your business — no matter what the size. Motivated, well-prepared employees are invaluable to your company and critical to long-term success. Throughout this article, we’ll cover everything you’ll want to know about: How to Recruit Maritime Employees Tips […] 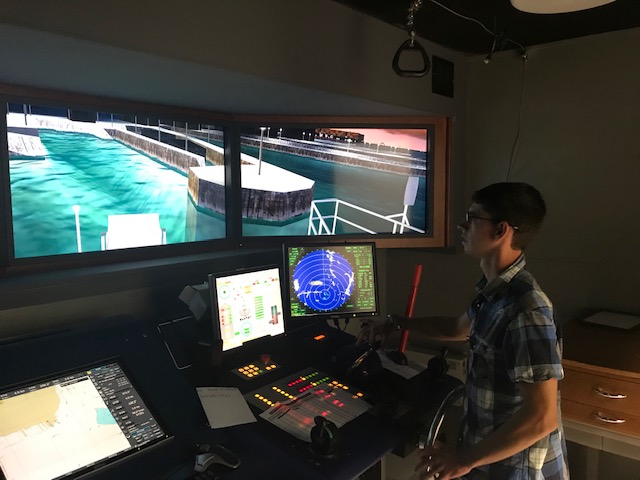 Forbes: Why We Desperately Need To Bring Back Vocational Training In Schools

Throughout most of U.S. history, American high school students were routinely taught vocational and job-ready skills along with the three Rs: reading, writing and arithmetic. Indeed readers of a certain age are likely to have fond memories of huddling over wooden workbenches learning a craft such as woodwork or maybe metal work, or any one of the hands-on projects that characterized the once-ubiquitous shop class. But in the 1950s, a different philosophy emerged...

Your Guide to STCW Certification

TL;DR: The Standards of Training Certification and Watchkeeping (STCW) are internationally recognized rules that direct the knowledge and skills mariners need to perform their jobs safely. Any mariners working aboard ships that operate in international waters must hold STCW endorsements. Different STCW endorsements allow you to do a variety of jobs aboard merchant vessels.   Throughout this article, we’ll […]