MITAGS’ staff and instructors are dedicated, dynamic, and passionate individuals who focus on getting the next generation of mariners
where they need to be through hands-on, comprehensive training and leadership development.
With extensive careers and backgrounds, we have experts in nearly all facets
of the maritime industry with no shortage of additional resources.
We’re lifelong learners, and truly care about developing the skills of our students and accomplishing the goals of our clients.
For us, it’s not just about checking the box and meeting the regulatory requirements, it’s about making sure those who walk through our doors,
take back practical tools and skills to the real world, so that they are safe and successful at their jobs. 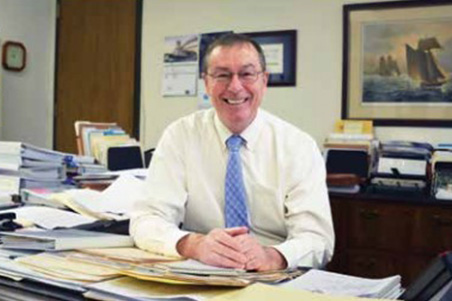 Dale Bateman is MITAGS’ Assistant Director and is located at our West Coast campus in Seattle, Washington. Dale came to MITAGS as a retired United States Coast Guard Commander and has recently celebrated his 5-year anniversary with MITAGS in 2019. In addition to his Assistant Director duties, you will often see Dale in the classroom teaching and assisting instructors in various courses.

Captain Bob Becker is MITAGS’ Director of Business Development who can be found primarily at our east campus, but also travels to our west coast campus too. Bob is an experienced master for MM&P contract vessels and alumnus of the United States Merchant Marine Academy. He is also a member of the Council of American Master Mariners and Boston Maritime Society.

Throughout her education, Christa geared herself towards engineering and found a niche in the maritime industry. Christa has interned in the industry where she created build plans for new classes of ships for the US Navy. She also did her share of deck cadet training on board and has an overall understanding of ship safety, navigational charts, routes, etc.

James “Jim” Clements is the Chair of MITAGS’ Marine Safety, Security, and Human Factors department, which oversees USCG, Military Sealift Command (MSC), and MARAD approved courses. Jim is also an active 30+ year Firefighter,-MD Licensed Paramedic, and Licensed Certified Clinical Social Worker- (LCSW-C) as well as holding degrees in Social Science and Secondary Education from Frostburg State University and a Master of Social Work from the University of Maryland School of Social Work and Community Planning. In his free time, Jim is also an active crewmember for the museum ship the SS John W. Brown, which operated as a merchant ship of the United States Merchant Marine during World War II. He enjoys, along with Sue, his wife, the company of his two sons, daughters-in-law and seven grandchildren.

Captain Conway is an alumnus of Texas A&M University, at Galveston, holding a Bachelor Degree of Science Marine Transportation.

Eric is the Director of MITAGS and is primarily located at the east coast campus in Baltimore, Maryland, but you will often see him at our west coast campus in Seattle, Washington. Eric is an alumni of the United States Merchant Marine Academy where he earned his Bachelor of Science, marine Transportation. Eric later earned his Masters of Management with a concentration in Organizational Leadership through the American Military University. Prior to his position of Director, Eric was an instructor of Officer in Charge of A Navigational Watch and Maritime Safety courses utilizing his Masters License (1600 ton) ,  Second Mate license (any Gross Tons Upon Oceans), and Maintenance, Material, Management Department Head, US Navy, experiences.

In Eric’s free time, he participates in the National Weather Service’s Skywarn Program where he serves as a trained Spotter.  His skills are often employed to warn staff at the east coast campus of impending severe weather.

Catie Gianelloni is MITAGS’ NSAP® Manager as well as Lead Simulator Operator (Baltimore) and instructor. You can often find Catie teaching a variety of MITAGS’ USCG approved courses such as: Able Seaman, Basic Training, RADAR, and ARPA. Despite working full time at MITAGS, Catie is still actively sailing as a 2nd Mate of Unlimited Tonnage. Graduating from The United States Merchant Marine Academy, Catie holds a Bachelor of Science, Marine Transportation and recently received her MBA from SMARTLY. Catie has been featured in SMART Magazine, Wall Street Journal “Faces of Success”, and Wheelhouse Weekly. She also holds awards in Sea Scout Service and from Boy and Girls Scouts for tours, and was the 2019 recipient of the Charles Pillsbury Award from the SOCP. When not working or sailing, Catie enjoys painting, quilting, yoga, swimming, and volunteering at “The Sharing Table” food pantry.

Captain Bob Kimball is the head of MITAGS’ License Advancement department. Captain Kimball holds a USCG Master’s License of Steam or Motor Vessels of any Gross Registered Tons with experience as Master and Chief Officer for conventional and container vessels. A graduate of SUNY Maritime College, Captain Kimball holds a Bachelor of Science in Marine Transportation as well as a Bachelor of Science in Meteorology and Oceanography. Captain Kimball also maintains membership in the Council of American Master Mariners.

Jon Kjaerulff is now the Assistant Director of Business Development at MITAGS, and specializes in maritime safety.

A graduate of the U.S. Merchant Marine Academy, Jon has sailed in positions from deckhand to Master aboard ships and workboats all over the world.  In 1989, after running a support ship during the Exxon Valdez cleanup effort, he came ashore and founded Fremont Maritime Services in Seattle.  Over the next 27 years, Jon established a reputation as a pioneer in the field of maritime safety, survival and firefighting training.  His company was one of the very first organizations in the U.S. to obtain Coast Guard approval for an STCW Basic Safety Training program, and from 2003 to 2015 Fremont Maritime was the only private company utilized by the U.S. Navy to provide marine firefighting training to its military sailors. Over the years Jon and his team worked with tens of thousands of inland and offshore mariners, providing training not only at Fremont’s school in Seattle, but at customer locations in Alaska, Oregon, California, Florida, Europe, Australia and the Caribbean.

In 2017, Fremont Maritime was purchased by MITAGS, and Jon came aboard as a marine safety training and business development specialist, helping to create new programs required by industry and regulations such as Subchapter M.

Jon and his wife Maria live on a farm in Gig Harbor, Washington.

Christine Klimkowski is a MITAGS instructor primarily based out of our west coast campus in Seattle. Christine is a Master Mariner and is currently a pilot trainee with the Southeast Alaska Pilots. Christine is a USCG approved instructor for courses from the Officer In Charge of Navigational Watch level through Management level Chief Mate/Master courses. In addition to being an USCG approved instructor, Christine is also a USCG Qualified Assessor. Christine is a graduate of SUNY Maritime College, holding a bachelors in Marine Environmental Science, emphasis on Meteorology and holds a Leadership Executive Masters of Business Administration from Seattle University. Outside of MITAGS, Christine has earned various awards such as: The Merchant Marine Expeditionary Medal (2003),Member of Toastmasters International (2013 – Present), District 2, Area 41 Director (2018-2019), Advanced Communicator and Leader Bronze Award, Toastmaster International (2018),Toastmasters District 2 Table Topics Contest, Second Place Winner (2014 & 2017), and is a Board Member of the Catholic Seafarers Center Seattle & Mission to Seafarers Seattle (2014 – Present).

Jenny Pitzen is MITAGS Student Instructional Services Manager for both east and west coasts, but is primarily found at our west coast campus. Jenny counsels and confers with students and prospective students within a program of study or regarding a student service. She also provides program and departmental procedures, policies, and goals & objectives for the organization.  Additionally, Jenny is responsible for maintaining program approvals for state and government agencies and is the VA certifying official for both campuses. Jenny holds a Masters of Education in Student Development Administration and in her free time enjoys live music, reading, and outdoor activities with her family.

Colleen is MITAGS’ Director of System Engineering. Holding a Masters in Science-Civil Engineering, Coastal and Ocean Engineering concentration, Colleen first came aboard as MITAGS’ Coastal Engineer in 2016. Some of Colleen’s duties are: Develop test matrices for simulation projects through analysis of environmental conditions in collaboration with clients, document and create reports summarizing simulation runs including swept path plots and analysis of specific ship parameters, create project specific databases for the Wärtsilä software, and maintain and test the Wärtsilä simulator performance. Colleen is also proficient in French, is a certified PADI advanced Scuba Driver, and a certified dog lover.

Gregg Trunnell opened the West Coast Campus of the Maritime Institute of Technology & Graduate Studies (formerly Pacific Maritime Institute) in Seattle, Washington in 1997. His visionary skills and ability to adapt programs that address the needs of the industry has helped propel MITAGS toward a long lasting partnership with industry and labor helping to (a) conceptualize new training methods, (b) redefine the relationship of the school to the workplace, and (c) continually create new and affordable venues for individuals to obtain the knowledge and skills necessary to work at sea and “prepare for the future”.

Gregg is currently a Senior Business Development Consultant and is responsible for Operational Research, NSAP and Global Sales.