Certificates and Documents for Merchant Ships

Ships must carry various certificates and documents on board to operate legally and to trade freely both nationally and internationally. The maritime industry commonly uses the terms “certificates” and “documents” interchangeably. Technically, however, certificates validate a fact, and documents provide evidence or proof of meeting a standard. This text will treat the two words as synonyms.

Jump to a section:

Do Merchant Ships Need to Bring Regulation Documents With Them?

Regulations govern procedure, behavior and standards within an industry, and are designed to meet the statutory or legal requirements of the state. A vessel’s flag state or country of registry determines the standard of law governing how their vessels operate in international waters and in their country’s water, territories and possessions. Ships traveling and conducting trade in a foreign country or flag state must also meet the international and national regulations of the country they are entering.

Regulatory documents such as certificates for merchant ships are often “mandatory” in that it is a requirement to carry them on board, but the laws of the vessel’s flag state do not directly require them. The word “mandate” can also denote a legal requirement. People often use “statutory certificates” and “mandatory certificates” interchangeably, but the term “mandatory” can be confusing, and we will avoid it in this introductory text.

What Documents Are Needed?

The IMO has standardized documents some countries may accept, per the Facilitation of Maritime Traffic Convention, but it is also common for countries to require a crew list and other forms for port entry. The specific documents required to operate and enter port are also a function of the ship’s classification, construction, tonnage and cargo.

How Are Laws and Regulations Different?

Legal or statutory requirements legally mandate the standards of construction, safe operation and management of ships. A country’s maritime laws set the legal requirements for operation within their jurisdiction, and the specific regulations establish the standards needed to meet the expectations of the law.

Flag states enforce their standards and regulations upon ships operating within or visiting their countries, but they may not choose to adopt a specific IMO regulation, or the regulation may yet to become codified into the laws of the flag state. In such cases, it is common for the flag state to advise its ships that the IMO regulation requires compliance for all vessels in international trade.

What Are Classification Societies?

What Do Classification Societies Do?

Flag state regulations, local laws and international conventions require initial and periodic inspections for ships. The vessel must make its survey and inspection records available to charterers and insurance companies, and they may be necessary for port entry and when transiting certain canals and waterways.

What Primary Regulatory or Statutory Certificates Should Seafarers Be Familiar With? 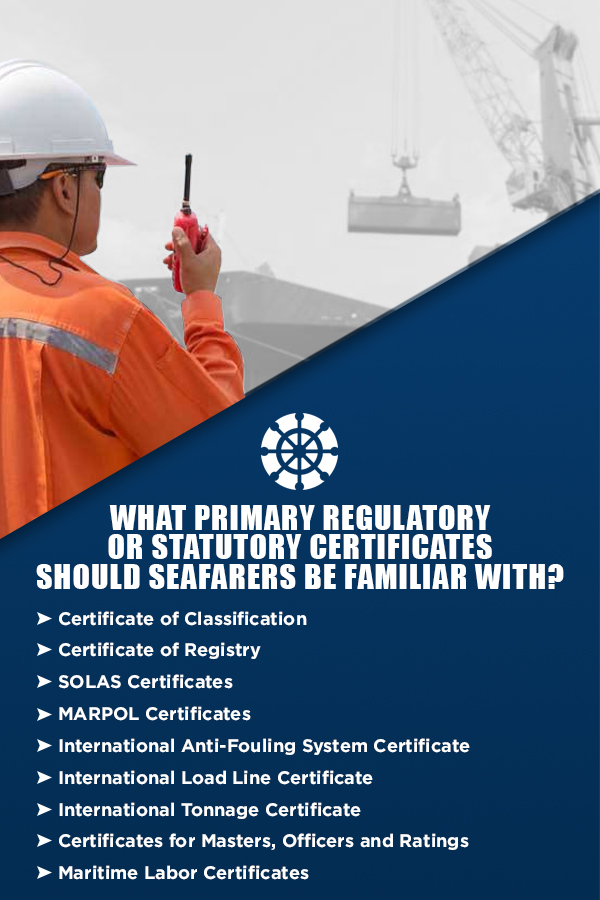 All flag states generally require merchant ship regulatory certificates and documents, as do IMO conventions and other international treaties. The IMO is a United Nations agency that sets standards for the international shipping community. The IMO has more than 171 member or flag states, and it represents governments, companies and labor interests in these states.

A Certificate of Classification from a qualified classification society certifies a vessel is structurally sound, and verifies the reliability and function of the propulsion and steering systems, power generation and auxiliary systems.

The certificate states that the vessel is complying with the rules of the classification society, but the document does not act as a warranty of safety, fitness of purpose or seaworthiness of the vessel. The registration of the vessel by its flag state requires this certificate.

One of the most impactful international treaties governing merchant ships is the International Convention for the Safety of Life at Sea (SOLAS). The IMO first adopted the SOLAS Convention in 1914 after the sinking of the Titanic, and it has undergone several revisions since, with the most recent version adopted in 1974. The SOLAS Convention establishes safety standards for the equipment, construction and operation of merchant ships. Ships of party nations must carry various SOLAS certificates on board, including the following.

As of October 2018, the 1974 SOLAS Convention had 165 contracting states, which accounted for over 99 percent of the global gross tonnage of merchant ships. Therefore, SOLAS certificates are statutory for the vast majority of cargo ships and other seafaring vessels.

The International Convention for the Prevention of Pollution from Ships, called the MARPOL Convention, is one of the most significant international maritime treaties addressing environmental protection. Also called MARPOL 73/78, this treaty first got introduced in 1973, and then modified in 1978. MARPOL is short for “maritime pollution,” and the convention aims to minimize pollution from dumping, oil, air pollution and other harmful substances. The MARPOL Convention requires ships of party nations to carry multiple statutory certificates, including the following.

Another maritime certificate aimed toward environmental protection is the International Anti-Fouling System Certificate. It is a mandate of the International Convention on the Control of Harmful Anti-Fouling Systems on Ships, and got adopted in 2001. This certificate verifies a ship’s anti-fouling system does not contain harmful organotin compounds. It also confirms that a protective coating is in place to prevent organotin compounds from leaching from anti-fouling paint on the ship’s hull or another external surface.

The International Convention on Load Lines establishes regulations for determining ship load lines, accounting for seasons and zones as well as factors of the ship construction, such as the quality of watertight doors and drain plugs of watertight compartments. The convention establishes six load lines that must be marked on all vessels:

Cargo ships carrying timber must have a second set of load line markings that correspond with each season.

The load lines this convention requires represent the maximum cargo load a ship can hold while maintaining the minimum freeboard limit. Compliance with load line requirements ensures ship stability and prevents too much stress on the hull of the ship. Ships registered in flag states that have ratified this convention must carry an International Load Line Certificate, which is up for renewal annually, or an International Load Line Exemption Certificate if the vessel has received an exemption.

Adopted in 1969 and entered into force in 1982, the International Convention on Tonnage Measurement of Ships established a universal system for tonnage measurement of ships. Ships registered in, or trading with, party nations must carry a statutory International Tonnage Certificate that lists the gross tonnage (GT) and net tonnage (NT) of the vessel.

A ship’s GT allows for the calculation of safety rules, regulations for safe manning and registration fees. Both GT and NT play a role in calculating dues at ports, making an International Tonnage Certificate crucial for international trading.

8. Certificates for Masters, Officers and Ratings

The International Convention on Standards of Training, Certification and Watchkeeping for Seafarers (STCW) requires all seafarers serving on merchant vessels and yachts to maintain and carry proper certificates. All crew, including officers, masters and watch personnel, must meet qualification standards for training, certification and watchkeeping, as outlined in the STCW.

Certificates required by the STCW are statutory for ships registered to party nations of the convention and mandatory for ships visiting ports of party nations. In 2019, there were 165 parties of the STCW Convention, accounting for over 99 percent of global tonnage.

All commercial ships in international trade must carry a Maritime Labour Certificate issued by the International Labour Organization (ILO) and the IMO. By requiring this certificate, the ILO Convention addresses a wide variety of labor and social issues, including employment policies, wages, employee contracts and industrial relations.

In 2006, the Maritime Labour Convention set standards for employment conditions and accommodations on ships, as well as minimum employment requirements, medical care and more. After passing an inspection, a ship will receive a Maritime Labour Certificate verifying its compliance with the standards of this convention. Flag states that have not yet ratified this convention may establish a voluntary compliance inspection program for their vessels until their body of law accepts and codifies it.

If you are just entering the maritime profession, navigating these various certificates may be complicated. The Maritime Institute of Technology and Graduate Studies (MITAGS) can provide all of the training you need to start your maritime career with ample knowledge and competent skills. The practical and theoretical training we offer at MITAGS provides a comprehensive maritime education.

Learn more about jump-starting your maritime career with MITAGS or contact us to get started.

Guide to a Master of Towing License

If you’d like to work in a short-haul towing environment among the highest officer positions, you need to earn a Master of Towing license. This license, designated by the United States Coast Guard (USCG), often meets the minimum requirements for fleeting operations. Earning a Master of Towing also reflects the time and experience you have. […]

When it comes to registering a boat or ship, there are various types of state jurisdiction, including flag state and port state. Whether you have interests in boats and international maritime laws or own ships, it’s useful to understand the difference between flag and port states. What Is a Flag State? A flag state is […]

How to Get Work on a Tugboat

If you’re interested in a career in the maritime industry, you may have considered working aboard a tugboat. It’s an interesting career path — you get to work closely with fellow crew members to tow a variety of different vessels and work in an exciting, dynamic environment. Throughout this article, we’ll cover everything you’ll want […]